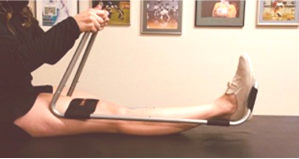 One of the most common problems that we have been seeing in our clinic are patients that have developed a stiff, arthritic knee; many seeing us for a second opinion. Often times, patients have seen another physician; either primary care, orthopedist, or orthopedic physician assistants and the patient may have been given a diagnosis of arthritis but did not fully understand the diagnosis. More commonly, the patient was told they have arthritis but come back when the knees are bad enough to do a total knee procedure. We have also found that several patients are not given any other options for treatment, and if they are too young for a knee replacement, doing nothing is a disservice to the patient. These patients are left to deal with their knee pain until they are old enough to qualify for the procedure, which has a negative impact on their quality of life.

There are many nonoperative treatments for arthritic knees that include cortisone injections, Hyaluronic Acid injections, heel wedges, orthotics, unloader braces, medications and supplementations. However, not all of these options work for everyone. We are surprised at the number of patients who are not given the option of physical therapy after being diagnosed with knee osteoarthritis. Those patients who are referred to physical therapy tend to get more strengthening exercises for their knees whereas range of motion is not well addressed. When a patient is first seen in our office the first thing we always check is their extension; the ability to fully extend the knee equal to the opposite knee. It is normal to have some degree of hyperextension in the knee joint and this will differ from person to person. This is why it is critical to compare the painful knee to the non-painful, or less painful, knee. Most patients we see in the office have a flexion contracture that has never been identified, or addressed, by the physician or the physical therapist. Without full extension, quadriceps strengthening is not effective as trying to strengthen a stiff knee will only make it stiffer and more painful. The following case study is a classic example of this type of patient.

A 49 year old male who worked as a construction worker with high demands on his knees came in with bilateral knee osteoarthritis for a second opinion on his knees. He has had a history of multiple injuries with recreational activities to his left knee that he only sought treatment for one time after an injury. Prior to being seen in our clinic, he had seen an orthopedist (7-8 years prior) who told him he had arthritis and needed both knees replaced but, due to his younger age, he should wait for surgery until he could not stand the pain anymore. His right knee had moderate joint space narrowing in the medial compartment and the left knee had moderate to severe joint space narrowing in the medial compartment. He had received several cortisone injections to the left knee, which gave him minimal short term relief in the knee. He had also tried heel wedges and orthotics, took Advil on regular basis and used CBD cream, all of which took the edge off but pain was progressively getting worse over time. He had difficulty with climbing stairs, going up and down ladders, prolonged standing, walking, sitting, occasional nighttime discomfort, and intermittent swelling. Prolonged sitting/driving made it difficult and painful to transition to walking. His pain levels were 7-8/10 with the left knee being more painful than the right knee and, on occasion, had to remove himself from work due to the pain.

On exam, the patient had a flexion contracture on the left with his range of motion 0-7-95 compared to the right knee at 2-0-97. He had mild effusion in both knees, an extensor lag with straight lag raise bilaterally and was unable to perform an active heel lift. We always take 4-view x-rays of both knees with the PA view being more sensitive to the joint space narrowing, and the AP view being more sensitive to the alignment of the knee. This patient’s x-rays showed bilateral moderate medial compartment joint space narrowing on the PA view and both were in varus deformity (bull leg). Since he had not gotten much relief with previous injections, he was given a double Medrol Dose pack and started on physical therapy same day. His first physical therapy session involved getting his knees straighter (full extension) with the use of an Ideal Knee and heel prop. He was also educated on ice/compression to reduce the effusion. A TUG test (gait/balance assessment) was performed and his time was 12.12 seconds. Normal time should be less than 10 seconds. His IKDC subjective survey score was 29/100 on the right and 26/100 on the left.

This patient was seen for four physical therapy treatments, which included instructions to perform stretches 3x/day and was started on low impact biking, starting light and working up to 30 minutes for 3-4 times a week. On his fourth treatment, he was reporting overall improvement in pain, 2-3/10 most days and improved function, with stairs and ladders still being the most challenging. He was getting ready to return to work full time in a couple of days and had more confidence in his knees. He was encouraged to not stop doing the stretches and continue the bike, which he was doing half a mile 3x/week. He was able to walk his dogs more comfortably as long as he stayed under a mile when walking. His TUG time improved to 7.2 seconds and he demonstrated a normal gait pattern. His effusion was none on the right and trace on the left. He was able to do a straight leg raise without a lag and perform an active heel lift bilaterally. His IKDC subjective survey scores improved to 53/100 on the right and 38/100 on the left. All this improved because his range of motion improved to 2-0-113 on the right knee and 1-0-108 on the left knee. His strength was tested with both Isokinetic and single leg press. His strength was not where it should be at 38% on isokinetic (quadriceps) machine and 55% on the single leg press (whole leg strength). Ideally, strength scores should be between 90-100% as the legs should be symmetrical. Therefore, there was still work to improve strength. Nevertheless, this case study illustrates the importance of gaining symmetrical range of motion first, as extension is the driving factor for how the knee feels and functions, and drives the ability to gain strength in the quadriceps muscle.