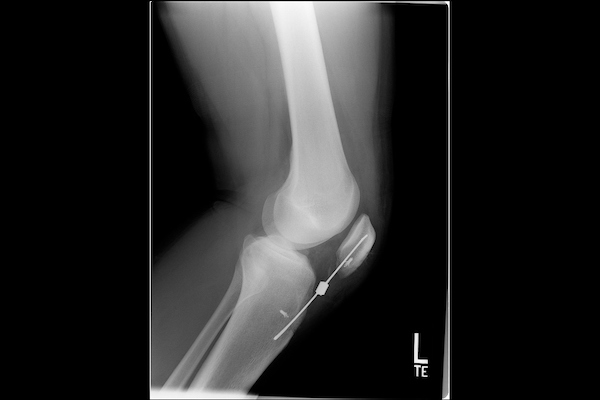 A patellar tendon rupture is a disabling injury that prevents the patient from achieving full knee extension. This rare injury, occurring in less than 0.5% of the population annually, has two main causes:

The rarity of patellar tendon rupture and the variable length of the tendon when the knee is bent or straight make this injury difficult to treat. “When the patient is asleep in surgery and the knee is straight, it’s easy for the surgeon to put the tendon back to the patella. Then many surgeons put the leg into a cast or immobilize it in another way for six weeks. The tendon heals too tight and the patient can’t bend the knee or breaks the repair,” says K. Donald Shelbourne, MD, an orthopedic surgeon at Shelbourne Knee Center.

To combat the shortcomings of other surgical techniques for patellar tendon ruptures and produce better outcomes for patients, Dr. Shelbourne developed an innovative surgical technique. This technique involves using end-to-end suturing of the tendon edges combined with retinacular repair and augmentation with a braided cable (Dall-Miles cable).

Suitable for patellar tendon rupture due to a primary injury or at the graft harvest site after anterior cruciate ligament (ACL) reconstruction, this technique has several advantages over other patellar tendon rupture repair techniques. Using the Dall-Miles cable enables the tendon to be repaired at the proper length with limited immobilization. Also, the cable permits aggressive postoperative rehabilitation and prevents repair rupture.

“Patellar tendon rupture repair with a Dall-Miles cable provides a predictable, successful outcome,” says Dr. Shelbourne. “The repair works and patients get their complete range of motion back.”

Immobilization for patients at Shelbourne Knee Center is limited to walking until the patient achieves quadriceps control (about two weeks). Each patient completes an aggressive postoperative rehabilitation protocol, guided by one of the center’s eight physical therapists.

The immediate post-operative protocol includes use of a continuous passive motion machine and exercises to restore range of motion (ROM), control swelling and increase quadriceps control. Rehabilitation progresses to optimize ROM and strength within the limits of the Dall-Miles cable. After the cable is removed, usually six to eight weeks post-operatively, rehabilitation continues. The goal at this point is to achieve ROM equal to the non-involved leg and to strengthen the quadriceps.

Research on patients who underwent patellar tendon rupture repair with a Dall-Miles cable at Shelbourne Knee Center confirm the predictable, successful outcome of this surgical technique and the center’s rehabilitation protocol.(1,2)

The first study involved 10 patients who underwent patellar tendon rupture repair between 1995 and 1998 (5 for a primary injury and 5 at the graft harvest site after ACL reconstruction).(1) The second study involved 13 patients who experienced patellar tendon ruptures out of 5,364 ACL reconstructions at Shelbourne Knee Center from 1982 to 2008 (incidence of 0.24%).(2)