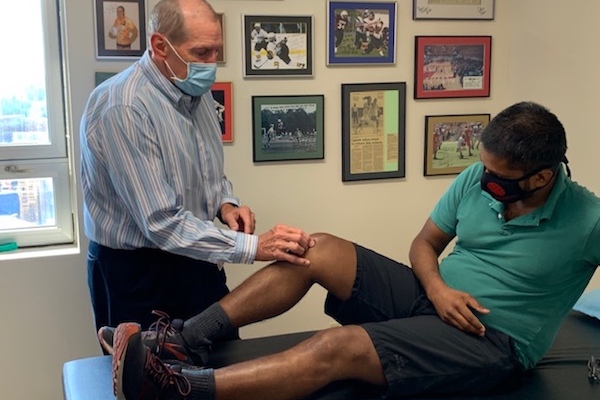 Jonathan Fernandes had never heard of the anterior cruciate ligament (ACL) until he tore his while practicing Jigo Tensin Ryu Jujutsu in September 2018. The 32-year-old mathematician at the University of Maryland is a 2nd degree black belt in this martial art. He’s also an avid Argentine tango dancer, runner, swimmer, and bicyclist.

“I heard three pops as I was up in the air,” says Jonathan. “Then my knee swelled.” He went to an urgent care center that took X-rays and they said that everything looked fine. They also suggested that he could see an orthopedic surgeon if he wanted a second opinion.

After being told by multiple people and also having read online that ACL reconstruction was a standard procedure, Jonathan had surgery with a hamstring graft in December 2018.

“In hindsight, I feel I should have done more research about this procedure and the surgeon,” he says.

Jonathan spent the next eight weeks wearing a brace. “Pretty early on, I could tell that something wasn't right. The knee felt sore all the time and there was a lot of swelling. To add to my worries, my knee would click every time I extended it from a bent position.”

The orthopedic surgeon said that what Jonathan was experiencing was normal, and that it would go away. “In a way, the problems did lessen by the time I was done with five months of physical therapy. But the clicking sound never stopped, and the knee would be sore and swollen after any extended physical activity, like jogging.”

Because of the persistent discomfort, Jonathan stopped running. Even dancing Tango became painful. When Jonathan participated in a tango festival a year after his surgery, his knee became very swollen. He went back to his orthopedic surgeon who again told him that everything was fine, and that the swelling will eventually go. “I was feeling pain and the knee was swollen a year post-op. The doctor's assurance did not make sense to me,” says Jonathan. “I had come to accept that there was no returning to Jujutsu.”

“I needed to get a second opinion,” says Jonathan. First, in January 2020, he went to a local orthopedic surgeon in Washington, DC, who told him that the ACL graft had stretched in the reconstructed knee. He also diagnosed patellar tracking disorder, the cause of the swelling.

The orthopedic surgeon gave Jonathan exercises to get the patella to track properly. “Within a month, the clicking was gone and with it, the swelling too,” says Jonathan. “With the swelling gone, the laxity in the knee was now very visible.”

A friend of Jonathan’s had traveled to Indianapolis for revision ACL surgery by K. Donald Shelbourne, MD, an orthopedic surgeon at Shelbourne Knee Center. He recommended that Jonathan get Dr. Shelbourne’s opinion on his knee. “So I started reading everything that I could find about Dr. Shelbourne. His research-backed track record with primary and revision ACL, and a protocol that has gotten many professional athletes back to playing at professional levels, was very appealing,” says Jonathan.

In June 2020, Jonathan drove to Indianapolis to see Dr. Shelbourne and learned that there was laxity in the reconstructed knee. “Dr. Shelbourne told me that the reconstructed ACL was intact, but it would very likely rupture if I tried to do any high intensity sports,” says Jonathan. “He said I could live with the ACL as is, however, having a revision ACL would open up many more active sports that I could be involved in, including getting back to martial arts and Jujutsu.”

Reading about poor outcomes for revision surgery online had worried Jonathan. He was reassured by his friend’s positive experience with Dr. Shelbourne, and “by the fact that Dr. Shelbourne has operated on more than 7,000 patients, with a focus on getting his patients to their pre-injury levels of fitness.”

Revision ACL reconstruction patients treated at Shelbourne Knee Center have a higher return-to-sport rate and a lower re-injury rate than primary ACL reconstruction patients at most orthopedic practices, according to a study published in the American Journal of Sports Medicine.1 Use of a patellar tendon graft, which allows for unrestricted rehabilitation and is stronger than allografts and hamstring grafts, is one reason for these results.

“What Dr. Shelbourne said was much more optimistic than what I found online,” says Jonathan. “After you visit his clinic and learn of his approach, you realize that this optimism is rooted in experience, research, and a carefully developed protocol.”

In July 2020, Dr. Shelbourne performed Jonathan’s revision ACL reconstruction. Jonathan rented an apartment in Indianapolis, and stayed there with his sister and brother-in-law for about three weeks after surgery. Now that he’s back in Maryland, he does his physical therapy at home, guided by his personal Shelbourne Knee Center physical therapist.

Return to an Active Life

At 2 months post-op, Jonathan feels better than he did 18 months after his first ACL reconstruction. He’s now driving, walking, and biking on his stationary bike.

“For the first time in two years, I have stopped obsessing over my knee,” says Jonathan. He is slowly working on returning to an active life. “I am thankful to Dr. Shelbourne and my physical therapist Alana Gillenwater for working with me and on me. I look forward to being able to do all the activities I love!”