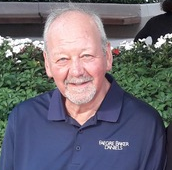 When David Huxtable’s left leg started collapsing every time he stood after a total knee replacement, he knew that something was wrong. “Every time I took a step on my left leg in physical therapy, my leg would pop out sideways,” says David, who is 70 years old and lives in Lafayette, Ind. David’s pain was more severe than it had been before the procedure.

Four years earlier, the retired aerospace engineer had his right knee replaced, so he knew that what he was experiencing wasn’t normal. The surgeon who performed the procedure told David that nothing was wrong, and he needed to build up his muscle strength through physical therapy. But more physical therapy didn’t make David’s knee stronger or more stable.

“I needed to go see somebody else. I decided to get a second, third, and fourth opinion,” says David. First, David went to see Orthopedic Surgeon Rodney Benner, MD, at Shelbourne Knee Center. “The new knee didn’t fit well, and Mr. Huxtable’s ligaments were too loose. This made David’s knee unstable and painful,” says Dr. Benner.

The only solution, says Dr. Benner, was a second surgery—revision total knee replacement. With one doctor saying everything was fine and another that he needed another surgery, David went to see two more orthopedic surgeons. They both agreed with Dr. Benner about the need for revision surgery. “I decided I would entrust Dr. Benner with the task of doing the revision to my knee,” says Huxtable.

Unlike many orthopedic surgeons who do total knee replacement, Dr. Benner also regularly performs revision surgery. This is a longer, more complex procedure than the original knee replacement. Removing some or all of the original implants and replacing them with new ones requires extensive planning and specialized expertise. When Dr. Benner did David’s revision surgery on August 14, 2017, he used specialized implants and tools to give David a good result.

“I woke up afterward and everything was fine,” says David. “The job Dr. Benner did was remarkable. I did not need to take a single pain killer.” David had needed pain medications after his other knee replacements.

David did post-op rehab for about six months. He had no problems.

“Dr. Benner and the staff at Shelbourne Knee Center know what they’re doing,” says David. “Dr. Benner was honest with me, and he’s easy to talk to.”

David’s quality of life rose from 6 (on a scale of 1–100) before surgery to 100 a year later. He had less pain and other symptoms and was able to return to his everyday activities and other things he liked to do:

Since his revision knee replacement, David has been able to travel again and enjoy life. He and his wife Darlene have made several trips to Florida, where they plan to move soon. They’ve also visited San Diego, where they lived before coming back to Indiana.

“Recently, I spent six hours walking around at the Indiana County Fair, with no problem whatsoever,” says David.